But the July temperatures are not the only thing in Texas burning hotter than the hinges on the Gates of Hell. There is an office near Wellborn and George Bush Drive in College Station that also has some very hot hinges. The name on the door – Kevin Sumlin.

Yes, Indeedee do, the hottest coach’s seat in the NCAA D-1 football is right here in College Station. Three years of 5-0 starts squandered. The motivational poster in his office reads WIN NOW! I think it was placed there by the AD and the HR people from Texas A&M. Might have been John Sharp. I believe this is called “The handwriting on the wall.”

It must really be hot because the SEC Media Days paired the Texas A&M with the Alabama to take some of the heat away from Sumlin. Sabin and Sumlin – hot, but for different reasons.

Speaking of hot seats – or at least warm – we have THE University of Texas coach Tom Herman featured on the football bible of Texas – Dave Campbell’s Texas Football. 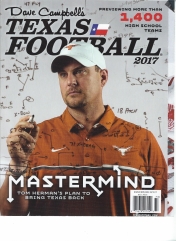 I cannot say for certain, but here’s what I’m thinking. My friends who attended and support THE University are going to want more than Coach Herman’s picture on the cover of a magazine. All of that football gibberish better transfer to the scoreboard with W’s on it every Saturday.

( I have so been saving to saythat.)

Friday, October 23, 2015 – The Friday Before Saturday College Football – Game On

First – my apology to Myles Garrett for misspelling his name last week.

The Schedule today begins with The Rain Barrel Bowls up and down Texas Interstate 35.

Starting in Austin and playing @ 11:00 on Fox 1 is THE University of Texas and Kansas State. Tell the Wildcats they are no longer in Kansas and give them a good hooking of the Horns. I have your photograph ready to post Roomie signifying a home win and winning streak for the Horns in DKR Memorial Stadium! Stay Strong and get it done!

Traveling north to Waco we find the Iowa State Weather Patterns visiting Waco and playing Baylor @ 11:00 on ESPN. I understand one is to wear green and gold depending on your ticket location. This will make McLane Stadium green and gold striped. I know you can get yellow (gold) rain slickers at Academy, but can you get green rain slickers? Is Nike working on that? Surely with that many uniforms and shades of green Nike has got something in the warehouse they can Fed-Ex to Waco for the fans.

Crossing the state line into Norman along I-35 we find Oklahoma and Texas Tech @ 2:30 on ESPN2. I wonder what Baker and Stoops and Coach Kliff and the Red Raiders have planned against and up their respectively sleeves besides a rough history.

Taking a right turn and headed toward Stillwater we find the Cowboys of Oklahoma State playing Kansas @ 2:30 on Fox 1 and slowing creeping up in the Big 12. Go Pokes. It’s Kansas. Remember they play basketball like Kentucky does.

Remember there are only 10 teams in the Big 12 and eight are playing. So that leaves TCU and WVa having the weekend off.

Now to the games that actually have meaning (the only ones worth watching) so that means the SEC teams because Ohio State plays Rutgers.

Opposite the Rain Barrel Bowls on the SECN @ 11:00 am will be Auburn and Arkansas with last place up for grabs in the SEC West. Do you like bacon on your burger Uncle Will Muschamp?

What once could have been interesting is now Alabama and Tennessee in Tuscaloosa @ 2:30. Oh no – the game is on CBS. I hope you do not get the Can’t Broadcast S##% announcers. Turn on the radio broadcast to avoid.

“You know, this is the first place we’ve played for a long, long time, that we never got booed when we came out,” Saban said. “First place. I’m telling you. It’s a really nice facility. They had 105,000 people. And they cheered their tail off for their team. And they made it hard for us to play.” ESPN quotes somewhere on their application.

At 3:00 on the SEC Network will be another game for last place in the SEC East with Missouri and Vanderbilt. Take a nap, but be up and ready for the only games of competition beginning at 6:00.

On ESPNU @ 6:00 we find Western Kentucky visiting Baton Rouge hosted by Leonard Fournette’s team the LSU Tigers. Run Leonard run. With each step you get a bit closer to going to New York to get a big trophy.

At 6:30 in another game of why are play this team? This is Mississippi State and Kentucky on the SECN. This is not Western Kentucky which I suppose is geographically west of the Kentucky that Mississippi State is playing. I understand the men’s basketball team at Kentucky is quite good. Yes – Number 1.

At 6:30 on Fox is the Utah Utes (I just love saying that) and USC Trojans in Los Angeles Memorial Coliseum. If Utah should become number two in The Committee’s ranking in November, will they be “the two Utes?” (My Cousin Vinny)

But the only game of significance is the Cutbirth Bowl (as in William Cutbirth Faulkner) on ESPN from Oxford Mississippi @ 6:00 when the Ole Miss Rebels host The Fighting Texas Aggies. It is an elimination game for the SEC West title. Should make visits to Baton Rouge interesting for both teams. But one game at a time.

So Howdy Damnit and Hotty Toddy and BTHO Ole Miss.

Two comments, a question and prediction.

The Eyes of Texas are no longer upon the AD, Steve Patterson.

It appears “till Gabriel blows his horn” is 22 months.

Are you (as in Texas) going to light The Tower?

You (as in Texas) will never get Nick Sabin.