I hope you are not in the polar vortex and that you are safe and warm by a fire and sipping something nice. It’s a might chilly here in Texas, but at least one can go outside and not literally freeze. By Saturday the temperature is expected to be 75. Stay warm.

That Monday morning feeling when you hear the temperature will be 32 degrees in the morning.

The answer is: gravy, mashed potatoes, coal and me.

What are four things that are lumpy?

Bad Ass trainer talked me into entering a fitness contest. I think I am the only one in the age bracket that can even attempt what she is having me do without having 911 on speed dial and an ambulance on standby in the parking lot.

Yesterday, I did a full 3D body scan at the gym. You stand still while on a rotating platform in your almost birthday suit. I was thinking of the stage in Les Miserable’s.

I thought I was in decent shape. But the numbers don’t lie. I am lumpy – 36% lumpy to be exact in some places. I am not even sure what the rest of the lumpy numbers mean. I look like a fat alien rag doll with stuffing poking out in various places – like my waistline. This reading means that I am only slightly above average. You know how I do not like to be average in anything.

So now I am doing 50 of everything and if it does not kill me it will make me strong. 50 ring rows, 50 squats, 50 stomach crunches, 50 full body push-ups, 50 bicep curls, 50 triceps’ curls and 50 more exercises (like burpees) I do not even want to think about. I do this twice per week and cardio once per week. Then I get on a bicycle or treadmill or row a fake boat. None of them go anywhere.

I have only been “conditioning” as BA says for a week. My body has not been this sore since Coach McGinty’s seventh grade P.E. class. I have to go now and try to find the brain I lost when I said I would do this. For a T-shirt and maybe my picture on the wall? What was I thinking?

Winter is coming! Do you ever wonder if Game of Thrones is actually in the future and not a fantasy of the past? I keep my crown ready just in case it is prophetic instead of dystopian past.

But winter is coming to Texas so they say. On Friday the high temperature in the Brazos Valley is expected to be around 72 and sunny with thunderstorms in the evening. Saturday night the low temperature is projected to be in the upper 20’s with a high in the 50’s on Sunday morning.

As usual I am prepared with the four basic food groups needed for hunkering down. Sweet, salty, alcohol and chocolate. Miss Peach has input and output necessities and is ready to sit on the heated throw in my lap.

But hey! It’s Texas. The following week’s temperature will rise and hover in the sixties and seventies. But alas, February will soon arrive and that means trail rides and rodeos. This always means rain and cold. Real cowboys don’t sleep in motor homes. Just saying.

Everybody stay warm and cover your petunias.

LOOK! I got a Ferrari! OK – we parked by one at Perry’s in The Woodlands

What’s a good party without a lampshade on your head and a boa around your neck? Kristen – the photo area rocked!

My fabulous and handsome great nephews! 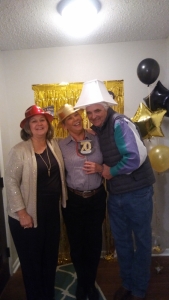 Looks as though Niece # 2 Deewee and I are going to do a dance routine.

As the song says: WE ARE FAMILY! Get up everybody and sing!

Just let me state for the record we’re  giving love in a family dose!

Captain’s Log 01.11.2019 – Resistance is futile. You will be assimilated. Wait. That is the Borg. We are not going to Delta Quadrant. Who is driving this Starship? We need to change course and warp speed to Septar Quadrant. That is where the Septuagenarians live. At 12:30 AM on Sunday, January 13, I will be assimilated into that decade.

Here is to all of the birth anniversaries born under the sign of Capricorn. Belated birthday wishes to Carol L. and RL on the 6th and 10th respectively. Tomorrow, January 12 we celebrate Molly and Dale and Carol M. days of birth.

Me and Molly Harper Fowler on our 13th birthdays. I do not know if there is a name for a Baptist and Methodist girl when she turns 13.

Then on Sunday, the lovely birthday girls, include, but is not limited to, me, Carolyn Sue, Nova and Debbie F. We all share the day of celebration.

We all invite you to celebrate with all the January birthdays while tapping your toes to another January BD – The Great Earl Scruggs born on Jan 6. I think Foggy Mountain Breakdown is appropriate for us. Don’t you? Engage! Warp Speed to Septar Quadrant.

In the forests of the night,

What immortal hand or eye

Fearful symmetry? How about the fearful offense or fearful defense of Clemson? Clemson ran through Alabama like you know what through a goose.

Congratulations to the Clemson Tigers for winning the big trophy stick associated with the National Football Championship. It was fun to see Dabo’s excitement as he ran and jumped along the sideline.

Dear Coach Saban, since you seem to recruit kickers who kick like 70 year old women, I would like to apply for the job next year. Really? A fake field goal? Did a Clemson zombie eat part of your brain?

One of the best parts of the game was the Chevy truck commercial with the Donny and Marie Osmond’s “I’m a little bit country; I’m a little bit rock and roll” as the dialog.

And so we now ask the important question. How many days until kickoff? It is actually 228 days until August 31.

To the rest of the college teams, we’ll see you on Monday, January 13, 2020 in New Orleans. I hope Jimbo and Aggies are there!

Until then, Elvis has left the football thinkings until next season. Happy Birthday, Elvis! I believe I will go have a peanut butter and nanner sandwich.

Clemson! Orange is the new Crimson.

It was a long night in Waco, wasn’t it, Geno? Way To Sic ‘Em Lady Bears!

Georgia is still on my mind. You had one thing to do. Next year you can play Notre Dame for The Let Your Fans Down Bowl. The Aggies will see you in Athens.

As soon as Bevo jumped into the crowd, the officials at The University of Texas should have begun their retort letter to PETA. You knew it was coming. PETA it seems does not like live mascots for colleges and universities. This is the same group that wanted to build a twelve foot marble monument in Bryan to the chickens killed in a truck accident on Highway 6. Here’s what I’m thinking. Unless those chickens play football, sing like Lyle Lovett or Robert Earle Keen, there is not going to be a monument to chickens other than this one.

But back to Bevo. Bevo it seems does not like dogs. Read Pulitzer Prize winning Austin American Statesman columnist’s Ken Herman’s take on Bevo, dogs and PETA. I feel certain that PETA poked Bevo.

Congratulations to LSU, Oklahoma State, Ohio State, and Kentucky on their bowl wins. To any fans from Pennsylvania, your teams must win their bowl games before they are mentioned.

Congratulations to THE University of Texas for their win over Georgia in the Sugar Bowl 28-21. This game was over when Bevo decided to have a pregame snack of an UGA Hot Dawg. Try that with the Miss Reveille, Bevo and you’ll be a steak.

To Georgia: What the hell? The next time you play a major bowl against a major team, may I suggest the following:

To the mouths talking in the booth last night and everyone else who was a booth mouth during the bowl games:

Only one more football game so it is time to move on to the bouncing round ball. Guess who has a ticket tomorrow night for Baylor and UCONN? See you, Geno!