They brought us memories of good times and sometimes not so good times.

Their voices and works will not be forgotten.

George, Carrie, Debbie, Prince, David, Florence and all of the others. See you on the other side.

The year 2016 thankfully is almost over. To quote from The Dead, “What a long strange trip it’s been.” With President Twitter about to take office, we do not know what 2017 brings. However, we must have faith and expectations of hope and promise. Here is a simple way to remember good things that will happen in 2017.

Several family members received a large empty glass container as a gift. With the containers there was a ball point pen and stacks of post it notes. On a simple index card I wrote “This is a 2017 Happiness and Blessings Jar. Whenever something makes you happy or you feel blessed, jot it down on a note and place in the jar. On December 31, 2017, take out the scraps of paper and recall how blessed you were during the year.” Then I tied the index card to the jar with a ribbon.

I am going to start my Happiness and Blessing Jar this evening when first – The Texas Aggie Women’s Basketball team defeats Prairie View A&M. This will be followed when the Texas Aggies BTHO Kansas State tonight in Texas Bowl.

I wrote this Christmas verse for all of my dear friends and family. It is sung to The Yellow Rose of Texas.

“We’re wearing shorts and T-shirts on Christmas Eve this year,

That’s why we live in Texas; there ain’t no snow down here,

We froze our ass off last week, but Santa he don’t care,

Cause we’re wearing shorts and T-shirts on Christmas Eve this year.

The temp is almost eighty, on Christmas Day I hear,

My friends in Colorado are high up in the snow,

But down here ya’ll in Texas, we’re wearing shorts you know.”

Wednesday, December 21, 2016 – The Winter Solstice and A Christmas Wreath

Wednesday, December 21, 2016 – The Winter Solstice and A Christmas Wreath 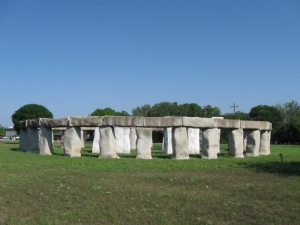 It also three days until the celebration of Christmas. I made this lovely creative and highly artistic decorative wreath. It is called A wreath; a Franklin.

Find out what it means to me.

And all through the house not a creature was stirring, not even a mouse.

The stocking is hung by the chimney with care in hopes that St. Nicholas soon will be there and put vodka and Cheetos in there. (Exercising my poetic license.)

Incorporated is the Patsy Cline Shrine because tonight I am going to see the Queen of Country music – Miss Loretta Lynn. RIP Patsy, Loretta’s still got it at 84 years young and we’ll be thinking about you. Always, Patsy Cline.

Our word for the day is Blue Norther. It is a meteorological term used in the South to indicate an extreme change of weather bringing in cold, frigid, Artic air. Long before forecasting and computer models one could look north and see a battleship blue gray sky stretching across the horizon. The bluer the sky became, the closer the bone chilling air was. What it really indicated was that your petunias were about to freeze and it was about to get colder than a well-digger’s butt in Montana.

I have a tee time tomorrow at 9:00 am. Since the temperatures will be in the upper 60’s rising to a balmy 79, I will wear shorts and layer the top with a couple of light weight shirts. In addition to the usual golfing needs of water and protein snacks, I will pack a large duffle bag that contains the following:

These items will be needed should I be unable to complete the round before the blue norther promises to drop temperatures into the upper 20’s.

Notice there is no plans to stop playing. It’s a golfer thing, right? Stay warm and be thankful you are.

I painted this using the methods of the pointillism artists. This technique is a technique of painting in which small, distinct dots of color are applied in patterns to from an image.

Yeah right. I rolled down the window of the car, held my phone out the window and took this last evening from the parking lot of Kroger’s on Boonville Road. Pretend you are in a museum looking at the pointillism artists. Look them up. Do I have to do everything for you?

Have a super mooning day!

Today is Sociology 101. We will be looking at two forms of so called communication. Memes and Emoticons. Spoiler alert: This is one of the HWIT where you think you know where it is going, but you do not.

What is a meme? An internet meme (/miːm/ MEEM) is defined as an activity, concept, catchphrase or piece of media which spreads, often as mimicry, from person to person via the Internet.

Meme sounds like something you call your grandmother. However, it usually involves a video of someone saying or doing something stupid, outrageous and often in a drunken or otherwise enhanced state of mind. It is then immediately and without thought posted to Facebook,Twitter, Instagram, Snap Chat or other social media. Think of it as STD – socially transmitted demonstration.

A meme is not to be confused with an emoticon. Aside from sounding like a laxative, here is a very fancy definition of emoticon to use at the next cocktail party, bar gathering or just to show off to strangers.

An emoticon is a metacommunicative pictorial representation of a facial expression which in the absence of body language and prosody serves to draw a receiver’s attention to the tenor or temper of a sender’s nominal verbal communication, changing and improving its interpretation. It expresses – often by means of punctuation marks – a person’s feelings or mood and can include numbers and letters, as well.

Allow me to translate some big words. Pictorial representation – a picture, somewhat cartoonish in nature. Metacommuncative – multiple means of communications that means different things to different people and to their brains and is dependent upon multiple factors such as current mood, emotional state of mind, alcohol intake, time of day/night, proper parental upbringing, and other social factors.

Prosody is a linguistic term (I like to say linguistic b/c it sound dirty, but isn’t) that means nonverbal cues. You do not hear what the person is saying.

Bottom line emoticons use those symbols and characters on a keyboard that are seldom used in normal communications or they are happy faces on steroids invented by the Japanese.

They all represent the transference of culture among people via technology. Reread that sentence remembering they mean “different things to different people and impact their brains in different ways and they are nonverbal.” Which part of communication am I missing?

It means socked or confused. http://www.symbols.com/symbol/1149

It is also the look in my eyes every morning to a new cabinet post. What is the meme or emoticon for FUBAR?

Monday, December 12, 2016 – One College Football Award and Your Monday Assignments

Monday, December 12, 2016 – One College Football Award and Your Monday Assignments

The only award today for college football goes to Sam Houston State University. While alumni are still proud of you, I must award you the Wait Until Next Year Award. It was either that one or the one to James Madison for “A Good Old Fashioned Big Thicket Bearkats’ Butt Kicking.”

Moving onward through the fog…

This just in from the William Robert Bagachips News Bureau. http://www.billybobbagachips.fakenews.com

The finalists for head of the Drug Enforcement Agency in President Elect Twitter’s Cabinet are Tommy Chong, Cheech Marin and Walter White with Mr. White having the inside track according to SNL.

Keep moving through the Worm Hole.

Our word for the day is thransonical. It is an adjective meaning boastful; vainglorious. His humour is lofty, his discourse peremptory, his tongue filed, his eye ambitious, his gait majestical, and his general behaviour vain, ridiculous, and thrasonical. — William Shakespeare, Love’s Labour’s Lost, 1598

For the Shakespearean challenged Love’s Labour’s Lost is a comedy with a theme of reality versus fantasy.

Assignment: Use thransonical in a sentence at your next Christmas party to describe President Elect Trump. Take a survey to determine how many people believe it to be complimentary.

Thought question for the day – How many millions did the Cabinet Post picks contribute to the Trump campaign? Within a couple of million will be close enough for government work.

Assignment: Select a potential Cabinet member and write an essay titled “Why _____ is qualified to hold the position of ______ .”

How long does the essay have to be? Long enough to cover the subject, so yes handing in a blank piece of paper with just the title will be sufficient. Yes, for extra credit you may address the entire cabinet and still turn in a tabla rasa for qualifications.

Class dismissed. I must see if my Rosetta Stone for learning Russian and Chinese has arrived.

Friday, December 9, 2016 – How Bout Them Applewhites? Or Good Things Come to He that Waits and Sammy Bearkat!!!

Friday, December 9, 2016 – How Bout Them Applewhites? Or Good Things Come to He that Waits and Sammy Bearkat!!!

What is the mascot of James Madison University? Happy Snarky Friday. Congratulations to Major Applewhite! The University of Houston announced the Offensive Coordinator will now be the Head Coach of the Cougars. Good move, Coogs!

However, tonight on ESPN2 at 6:00 pm the best football team in Texas will play  James Madison University in the quarter finals of the FCS playoffs.

This promises to be an aerial attack with both teams averaging around 50 points per game. Sam Houston is the lone unbeaten team remaining in the FCS and is joined by Western Michigan (13-0) and Alabama (13-0) as the only unblemished teams in all of Division I football.

The mascot of James Madison University is Dukes Dog or just Dukes. I do not know why. You can Google on your own. See you in Frisco, Texas, Kats!