Music for goat yoga – … Goat yoga needs love too and it’s up against the wall redneck yoga; yoga we have learned to love so well…

I know I have written about goat yoga before. It is a yoga done where a small goat stands on your back or other body part. Now it has arrived in the Brazos Valley.  At least for one day, goat yoga was at Blackwater Draw Brewing Company. Yoga at a bar is good. Yoga with a goat in a bar is not so good.

Here are some quotes from Rachel Henson Goat Yoga owner from Houston.

I am not sure when the Goat Yoga Lady will be back in the BV I am certain I will be out of town that day. However, if find you Zen with a goat in goat yoga, then buy your own goat and be happy. As for me, I’ll stay with the cat.

And KB, if you are reading this, Just say NO to Goats!

Golf hazards do not always mean water and woods. After I stopped laughing I felt sorry for this young man.

My golf course animal rule: My emergency room deductible is $50. A box of cheap golf balls is $25. Therefore, if the ball goes into the grass or weeds and the greenery is up to my shoe laces, it is considered a lost ball and gone to snake land or as golfers say “where the monkeys make love.”

There is also the unwritten rule of “play the ball where the monkeys drop it.” When the British introduced golf to India during colonial days, monkeys were a serious problem. The animals would take a golfer’s ball, run with it and then drop it. The British were also a serious problem for the India, but that is another story.

If you think about it, sometimes it is like life. You just have to play life where the monkey drops you. Or in this young man’s case, where the goose drops you. 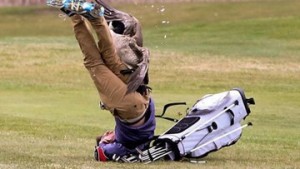 Good read on the British, monkeys and life.

I have a murmuration of starlings. Google murmuration. Google starling.

Ok, there are only a couple of these nasty birds, but they are building their nasty nest above my front door. This means baby starlings are not far behind. This creates a poop deluge for those coming to the front door. I am not certain if my homeowners insurance covers “poop accidents” if someone slips and falls due to droppings.

While Peach, the cat, finds them fascinating to watch, I will not feel bad when I go wash away their nest this afternoon. Then maybe I’ll watch Alfred Hitchcock’s The Birds. I still wonder how they got the house so clean after hundreds of birds were in the living room. This scene is before Tippy goes to the attic. Actually, those birds did not poop either. That green suit she had on is spotless when Rod Taylor rescues her.

There are only two birds outside my front door. They have only been there two days, but there is already poop. Therefore, I must go wash away the birds’ nest.

I’ll listen to these truly inspirational bird words from The Trashmen from 1963 while washing the front door. Bird, bird, bird is the word…

There was a steady stream of people at the George Bush Library and Museum this morning. We were paying final respects to First Lady, Barbara Bush. Walk with me in pictures. 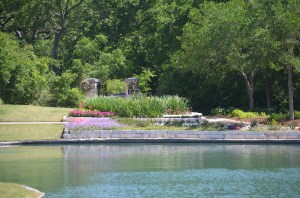 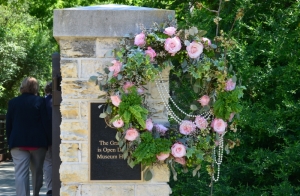 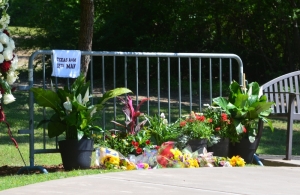 Yesterday, April 21, Aggie Muster became an even more special and solemn occasion. Hundreds of us lined Texas Avenue and George Bush Drive in College Station to watch the motorcade go to the Bush Library and to say our final goodbye to former First Lady, Barbara Bush.

On Thursday, I took this photo of the George Bush Library with the flags at half-staff.

Local media informed those who wanted to watch the motorcade to be parked and in place by 2:00 pm. Since we always want to be on the front row of history, Ms. Navasota and I arrived at 12:30. But we met the coolest ladies and had the greatest conversations. Note the following photograph:

Social media allowed us to track the motorcade from the moment it left St. Martin’s Church in Houston to the arrival in College Station. Here are some photographs of history. Because I know many of you are familiar with the Texas A&M campus, you will recognize where these photos are taken. 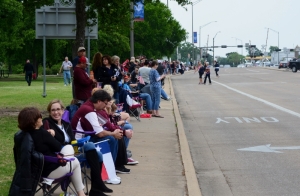 This is looking left toward Wellborn Road.  Texas Ave. is about 1.5 miles. Imagine the number of people,

The one below is looking right toward the Bush Library In the distance you can see the police vehicle. Public was not allowed past that point.

Motorcade about to cross RR tracks.

First vehicle behind the hearse and the only beige one in the motorcade. I suspect the former presidents were here.  Second group of vehicles were family and friends.

And then they were gone..

But then there was Aggie Muster. Next year, 2019, will be the official Aggie Muster for the Bush Family. However, last evening the first name called was “Barbara Pierce Bush” and the attendees in Reed Arena and your Aggie Family answered “Here.”

Outlook – bad. This is for all of the fake followers who have outlook.com as an address.

If you are actually a real person and not a bot,

Then leave me a message to say you are not.

Yes, I fixed the step ladder so my fur baby, Peach, could look out the front door.

If you love fur babies, then you are my friend,

But even if you don’t, this is still The End.

Monday, April 2, 2018 – While Her Loyal Sons are Shooting Onward with a THREE!

Monday, April 2, 2018 – While Her Loyal Sons are Shooting Onward with a THREE!

Cheer, cheer for old Notre Dame,
Wake up the echoes cheering her name,
Send a volley cheer on high,
Shake down the thunder from the sky.
What though the odds be great or small
Old Notre Dame will win over all,
While her loyal sons are marching
Onward to victory. 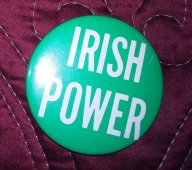 If you missed the final seconds of the women’s Division I National basketball championship yesterday, it is worth a google to see the last seconds, even if you do not like basketball. ND is going to need a mural with Three point Jesus to compliment Touchdown Jesus.

At least it wasn’t UConn. Congratulations to Muffett McGraw and Notre Dame and congratulations of Vic Sheafer and the Mississippi State Bulldogs. Congratulations to all of the teams for giving fans one of the most exciting women’s brackets of basketball in years. It was literally a record setting (and breath taking) Final Four preceded by games played by outstanding young women displaying superb athletic skills.

Tonight the men’s Division I National Championship in basketball will be decided between Michigan and Villanova to close out the 2018 basketball season.

Here’s what I’m thinking. Watch out for the Catholics again. And how many days until football season begins?