Before the Snark appears, sincerely let us send our thoughts and prayers to those in the path of Hurricane Matthew.

Also, let us send our love and good byes to LSU’s Mike VI as his cancer has spread. LSU is allowing fans to come say their final good byes to one of the most beautiful mascots in college football. A search begins soon for Mike VII. Mike VII will come from a tiger rescue reserve facility.

Paraphrase from Macbeth – “Enter the Snark with a taper.”

Baylor – A three-week BYE! Not playing for three weeks does not help your championship hopes. Of course, neither does playing schools like Kansas.

Coming to you live from state fairgrounds of Texas we have The Red River Shootout on FS1 @ 11:00 AM. This was once the game from which national championships came – THE University of Texas Longhorns and The Sooners of Oklahoma University. Now it is the game that sends rumors throughout the various cyberspheres. With all due respect to Willie N. …

Sometime in the night.

And they’re flying down to Houston with forgetting him the nature of their flight.”

Speaking of Houston, as in The University of, we have the #5 untested Cougars playing the Midshipman from Navy on ESPN @ 2:00. Anchors Away, my boys, Anchors Away!

Before we get to Texas A&M and the Faded tu Volunteers of Tennessee, let us discuss # 1 Alabama and # 16 Arkansas that is on ESPN at 6:00. I feel the need to express this in language understandable for those rooting for Arkansas.

“Bubba, get me another beer while I talk. Just yesterday I was saying to my cousin and wife, Thelma Sue, that them folks from Bama better be careful. These ain’t no ordinary hogs. These here are Razorbacks. Just the other day one got up under the trailer and started rooting around. I run out with my AK 47 and started shooting in the air to scare it. He run under the car and damn near knocked it off its cement blocks fore he run off into the woods. Just saying Bama better be bringing it. Me and Bubba are fixing to rewire the trailers to borrow the neighbors cable to watch the game. Come on, Bubba. Race you in the four wheeler.”

Coming to your CBS station at 2:30 live from Kyle Field in College Station, Texas we have the # 8 The Fighting Aggies of Texas A&M and the Luckiest Dang Team in football – the # 9 Volunteers of Tennessee.

Since I am not going to campus at 5:30 AM in the morning to have my sign approved for ESPN Game Day I will just list a few ideas I had:

Reveille is prettier than Smokey.

What color orange is that? Bleach Faded?

Please Lee Curses, put the coon skin cap on to pick Tennessee so TAMU will win. (Also, make fun of Reveille again and you will not get out of town in one piece.)

Kirk Herbstreit – can I get my picture made with you?

Once, twice, three times a Hail Mary – not in the Aggie’s house.

Monday, October 19, 2015 – Monday After Saturday College Football Awards – The Monday after Saturday College Football Awards post is sponsored today by the word “interception.” It is a noun that means when the quarterback of your team throws the ball to the other team. Synonyms include, but are not limited to “damn it”, “Oh S#$%”, “holy S#$%.and other words unfit to print.

Before we start the ado and further it, a huge thank you to the Hoke and Ellis families for such a great tailgating experience. Can’t wait for the next one.
The first award is the Rip Tide Award and goes to the Alabama Crimson Tide for rolling over Texas A&M like a hurricane named Henry.

The Governor’s Reprieve Award goes to the Texas A&M offense who could not execute on given Bama opportunities.

The Pepto Bismal Award goes to Ole Miss for being upset by Memphis. Thank you Memphis for suddenly making the SEC West much more interesting.

The Ugliest Uniform Award is a tie between Oregon and Baylor. Oregon, you looked like green peas running around on the field. And Baylor – Gray? It is unattractive for being # 2. Ohio State – as in still #1 – can wear gray because it is their school color. Yours is not gray – it is gold and green, which begs the question – Does Nike have a building that just makes 50 shades of green for Baylor and Oregon?

The High Point Award for scoring the most points goes to Baylor. Yawn! 62-to 38 over West Virginia.

The You Can’t Get There from Norman Award and the We Would Have Come Sooner Award goes to Oklahoma for the team’s 8 hour flight delay to K-State. Sooners win second place for points scored. OU – 55- K-State – 0.

The Halloween Creeping Up on You Award goes to Oklahoma State University. The Cowboys are quietly creeping up in the Big 12 with a 6-0 record.

The Yogi Berra Award for It Ain’t Over Until It’s Over goes to the Michigan State Spartans for defeating Michigan (Big Blue) on a last second fumbled punt scooped up Michigan State to score the winning touchdown as time expired.

And the next to the last award as I step onto my soapbox – goes to – CBS and the broadcast team of Verne Lunquist and Gary DumbAss – whatever your name is. YOU TWO ARE TERRIBLE! You make Brent Musberger and Jesse Palmer look like award winning journalists. When was the last time you called a football game, Mr. Lunquist? – The Four Horsemen of Notre Dame?

No wonder during the Bowl and Playoff Season the CBS share of the sports market looks like this.

It is because of dinosaurs like you. Here is only a few reasons why you should be fired, let go with pension, retire, whatever – just be out of town before sundown.

You did not know the rules thus missing many calls.
You did not do your homework and could only discuss the 2012 Alabama/Texas A&M game. Here’s What I’m Thinking had more history between Texas A&M and Alabama than you mentioned during the entire game.
You are supposed to be objective. Therefore when the defense, as in Texas A&M, makes a good play, one does not say “Alabama made a mistake.”
Johnny Manziel no longer attends Texas A&M and Lunquist you said it on air – “on behalf of CBS it should mentioned and “I think so too” and then proceeded to discuss issue recent issue with Johnny Manziel. In addition to – you are not paid to report the news; you had the facts incorrect when you inappropriately mentioned it.

Neither of you is paid to THINK. What are you psychic? You do not know what anybody is thinking. For example – Gary Dumbass saying at least three times on kick offs – “I think he should have run the ball out of the end zone. That was wrong.” No one cares what you think, Gary.

In addition don’t criticize the players, coaches referees by saying things such as “Well that was the quarterback, coaches’, referees, any other players fault!”

In addition, Gary Dumbass, I do not need nor want to hear a 20 second (yes, I timed it) diatribe on quarterback efficiency numbers and how they are calculated. I do not care. Do you get paid by the number of words you utter?

You are paid to tell me what is going on down on the football field. If either of you were paid to think and criticize you would not be sitting the announcer’s booth saying stupid things while reading from a prepared script left over from 2012.

So I award the two of you the CBS Award for making College Broadcasts that Suck.

And last I award myself – Great Tailgate pictures for capturing a pic of Coach Sumlin,

The Commandant leading the Corp March In 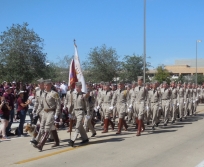 and even Miss Reveille at parade rest. 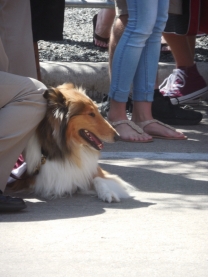 It seems I was able to catch everything except a Kyle Allen pass.